Need to clarify what I have done, because the next step is to extend this model to handle the SPI bus. I’m trying to prototype multiple threads accessing a common resource – the UART in this example.   I also want to make sure that I can shut down the processor as much as possible while this is going on. This is not rocket science, just a RTX familiarization exercise.

I’m using RTX which is an RTOS provided by Keil, but available for free via ARM, and Nordic.  It’s reasonably lightweight, and allegedly well-tried and tested.  The question is can I get it to do what I need.

My test program needs to demonstrate use of a mutex to serialize access to a shared resource (the UART, as a stand-in for the SPI bus), and show that it can be driven from a variety of types of threads: the main loop, user threads, and a timer event handler.

The test program sets up five threads, three of which try to output to the UART in parallel.   Here’s what each thread does:

Each thread is assigned a LED which get’s turned on whenever it is the active thread.

I have two interesting observations.

Here are the LED assignments, and below is a video showing the program running. 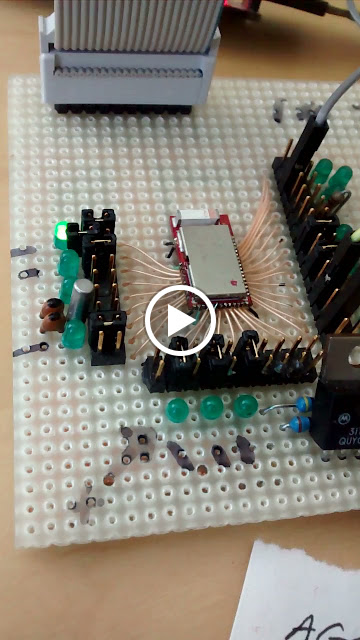