We were a little concerned about the antennae on TS06.3 boards.  Recall that the ground plane had extended under the DW module which was against their rules, so David had scraped it off.  The good news is that the TS06.3 antenna seem only to be about 50% as effective as the TS06.2 boards.  Given the packet loss is quite small, we can live with that I think.

I did some rough-and-ready tests to see how many packets get lost.

I left the simplest transceiver programs running on TS06.2 all last night.  The transmitter logs more packets than the receiver.  Sending packets all night at 1Hz 13.58% got lost, which is both dreadful, and strange.  I’ll run that again, and see if it is consistent.   I would expect close to perfection, but sure less than 1% for transceivers  8″ apart, transmitting one packet every second.  Note that my later tests send packets a lot faster.

This morning I moved the transceivers 12″ apart and sent packets at 10ms intervals, and got 0.12% packet loss.

Moving the tranceivers back to 6″ separation I now get 0.11% 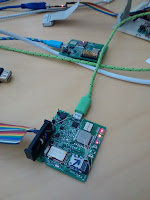 Here are the exacting test conditions,  The DW antenna are about 6″ apart. The results are about the same.

While the test is running the listener code in the Nordic is awake an impreceptibly small amount of time.  (I am not sleeping the DW yet.)
The transmitter is sending stuff as fast as it can and rarely get’s to sleep.  That doesn’t seem quite right, because sending packets shouldn’t be a big overhead.