The paste I used was too old. But I have overcome that problem for the time being. I had a new container of paste (it looks identical to the small one they showed in the Sparkfun video) that I was planning to use. I have had it for a year, but I thought it might be OK since it was wrapped in plastic, and had a seal on the top of the jar. But when I took off the seal the lump of paste at the bottom of the container was hard as a rock. Therefore I used one of the three full ChipQuik syringes I have. The paste looked fine and flux was evenly distributed throughout the solder powder. However, it didn’t melt properly. The balls clumped up or just didn’t melt at all in some places, but other areas were OK. Obviously the flux composition changes over time. After adding flux and touching it up with an iron all looks good or acceptable.
I spent the first part of today bringing up the power supplies. There were several board design errors.
– U2 SHDNn needs to be pulled high until the uC comes up.
– U3 SHDNn needs to be pulled high until the uC comes up.
– U3 Vin needs a 10uF cap
– U3 voltage divider must connect to VOUT instead of VIN
I tied SHDNn on both devices to their Vin, forgetting that the signals also goe to the uC module. Therefore I put 4V on those module inputs while there was no voltage at the Vdd pins. This forward biased the ESD diodes on the nRF51822 and supplied power to the rest of the chip, enough that some of the LEDs came. The module could be damaged, but it might still be OK, since we already did basically the same thing once on the perf boards. If it’s damaged it will not be hard to replace.
Now both power supplies are working. The (eventually) solar cell powered regulator is supposed to start at 250mV but it doesn’t start until there is 800mV on the input and it needs at least 1A to start when it is feeding the second regulator. Once it starts the current drops to nothing. When there is a battery on the output (of the first regulator) the starting current won’t be a problem; I wonder if the 250mV start voltage is dependent on a battery being present on its output. It shouldn’t be. So why is the starting voltage so high? Questions for the LT apps engineer.
I’m not sure how to set up the main regulator optimally. It’s working with the values shown in the datasheet. I don’t understand the theory of operation where poles and zeroes are discussed. I didn’t get much about transfer functions in school and there was no reason to learn about it later. 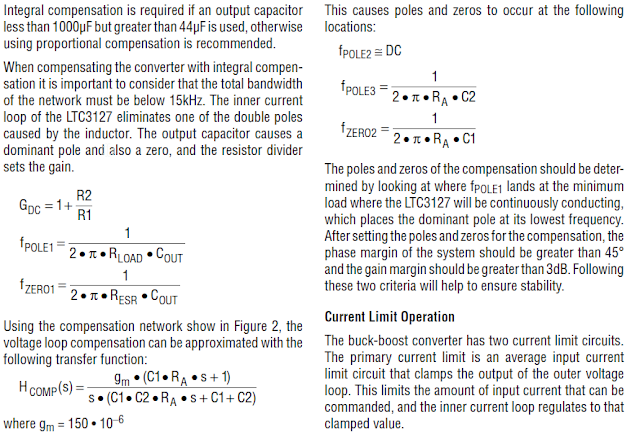 Going to https://en.wikipedia.org/wiki/Pole%E2%80%93zero_plot reinforces my feeling of ignorance. I thought I wanted to use LTC3335 for the next design; I see that it doesn’t have a compensation network connection so I wouldn’t need to worry about the network design. But the LTC3335 needs 1.8V input voltage so using a small solar cell wouldn’t work with it. To use a solar cell would require two regulators as in the present design. An additional issue could be that the LTC3335 can output only 50mA, and the DW module receive current is 160 mA. If the DW only needs high current for a few hundred uS then a big cap might be adequate. The LTC3335 is perfect for powering from a coin cell. Maybe there can be one design for anchors and another for tags. But tags need the solar power more than the anchors.
For now it won’t hurt to find out the optimum values for the LTC3107. Anyway, it’s working. Now I can put in the jumpers to turn on the modules.
I am behind schedule at work. I think I need to go in tomorrow, and there is a special meeting called for 10:30 AM Monday morning that I need to attend, so I should wait at least until Tuesday to go to SF.