Brenda is here so progress is slow, because we are gardening, and hosting fam.  More fam. tomorrow too.
For some reason I am obsessed with the idea of making a watch – well a series of them actually.  I think it would be cool to bang out a new variation every month.  I have been frustrated with all the watches I have seen, because, broadly speaking, none seem to do things I care about, or even do the things they are supposed to do smoothly – even telling the time isn't easy with a bunch of them.  But since telling the time is not a priority for me…  So why a circular display they ask…  dunno yet, except I think it's important to have a design that doesn't look like support-for-sickies.
Making a watch is super-hard.  I assume that the reason that current watches are kind of lame is because it's just too hard to make them.  It's clear that the power and packaging issues are a major constraint, but I'm guessing that there are a lot of other things that I just don't understand – like charging. But there doesn't seem to be an experimental platform (like an Arduino) that is in a watch format that I can play around with.  Adding a new component is incredibly disruptive.   I'm also assuming that if someone had a design that was super-cool and useful, that skilled folks would bang it out in a few days.  But a watch needs such integrated design skills that it's hard for any single person to get their head around the major challenges at every level. So good ideas tend to happen at the hardware, or package, or software levels and interfere with each other so much that more disruptive ideas are slow to happen.
It would be great if I could make a watch that was almost as easy as software (!) to change as ideas evolved.  I'd sacrifice looks, and robustness for speed to iterate, and easyness of measuring usage parameters.  I just need my own team of 20 people – or is it 200?
So I stumble on trying to understand the issues.  In the absence of a team, and megabucks, but in the presence of obsession, I try to keep my aspirations in bounds.
Clearly I can't make a watch in one go.  I need to figure out how to: 1) talk to various components; 2) power all the different power domains; 3) measure where all the power goes, and lastly; 4) how to conveniently recharge it.  So a watch simulator board is first step.  I'll use an nRF52 connected to a board with options for different crap to be attached.  Kind of like TS05b but probably a lot more clunky that your neat design, because of the display.  I suppose there will be a few iterations of that.  Then the next phase is to transform it into a wearable, and add an IMU and whatever else can be squeezed in.
Now back to Earth.  I have made a footprint for the teensy touch-panel connector.  I'm not sure I have all the dimensions, right, but it's a start I guess.  I found a display connector online, so all I have to do is plonk them on a board and connect them.   I have found this to be a lot harder than I thought because the display demands the connectors to be on opposite sides of the board.  I assume that's going to make it almost impossible to solder – notwithstanding the fact that the connector pitch is absurdly tiny. 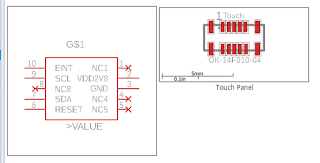 I theory, the board layout is trivial now because I'm just connecting the SMD connectors to standard headers and thence by patch wires to a Nordic eval board.  I really do understand so much more of the tour-de-force you exhibited to build those TS boards – and you banged out a whole bunch of them.
If I can connect the display and make software work, then I'll work on the PSU side of things.
Whatever you are able/allowed to do to help is gratefully received of course, but I'm very sensitive to you conflicts of interest.  I'm sure my feeble efforts must be pretty laughable compared with the stuff going on at Am., but it gives me pleasure to learn all this new stuff.
On Mon, Jul 8, 2019, 07:29 David Carkeek <dcarkeek@gmail.com> wrote:

Didn't I already respond? It looks like I didn't. I'm almost certain that you will not find a parts library that has the connector footprint you need. Since you indicated that you were going to make one yourself, how is it coming along? When I was trying to make footprints I was frustrated by the inconsistent way that dimensions were given. MuRata datasheets were the worst.
Are we going to make a board?
On Tue, Jul 2, 2019 at 5:52 AM Mik Lamming <mik@lamming.com> wrote:

Oh I'm using Eagle as usual.  I kind of understand it.  It isn't really a layout problem, it's that I can't find a parts library for the connectors.
I'm trying to make a trivial board to connect all the different displays I have collected to a set of header pins, so I can figure out the driver issues.  Modern displays use MIPI which requires fast hardware in the uC to drive it.  I will have to use SPI which is slow.  Nordic doesn't have MIPI, but ST does.  I thought about using an ST, but that makes everything else so much more complicated, and I'm already out of my depth.
My challenge is that the displays I have been able to get generally have tiny connectors. 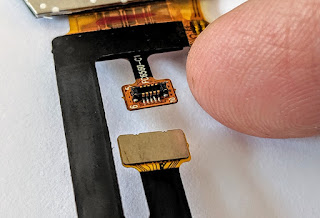 Worse, my most practical display uses a connector that seems to be obsolete.  Of course – that's why I could get it!  I have a few connectors, but I just can't seem to get the Eagle parts library, so I am making my own.  Measuring stuff is hard of course.   Then the challenge is going to be soldering something that has 10 pins and is 4mm long.  I expect it will take me a few iterations, but I'm enjoying learning the process.
On Tue, Jul 2, 2019 at 6:17 AM David Carkeek <dcarkeek@gmail.com> wrote:

What program are you going to be using? At one point I could have done it in Eagle but I have forgotten almost everything. Since I was able to do it it wasn't that hard to figure out, so I can probably do it again. Also, Yali would be overjoyed to have something to do for Touchstone.
What do you think about making a platform board with all of the circuits you are interested in characterizing?
On Mon, Jul 1, 2019 at 4:01 AM Mik Lamming <mik@lamming.com> wrote:

Is there an obvious place to go for component outlines.  I need to make a breakout board with the connector on it, and I can't find it.  I can make it I guess, which would be a new skill, but I'm not sure I'd trust it.
ok-14f010-04