I did a few rough and ready tests around the house. 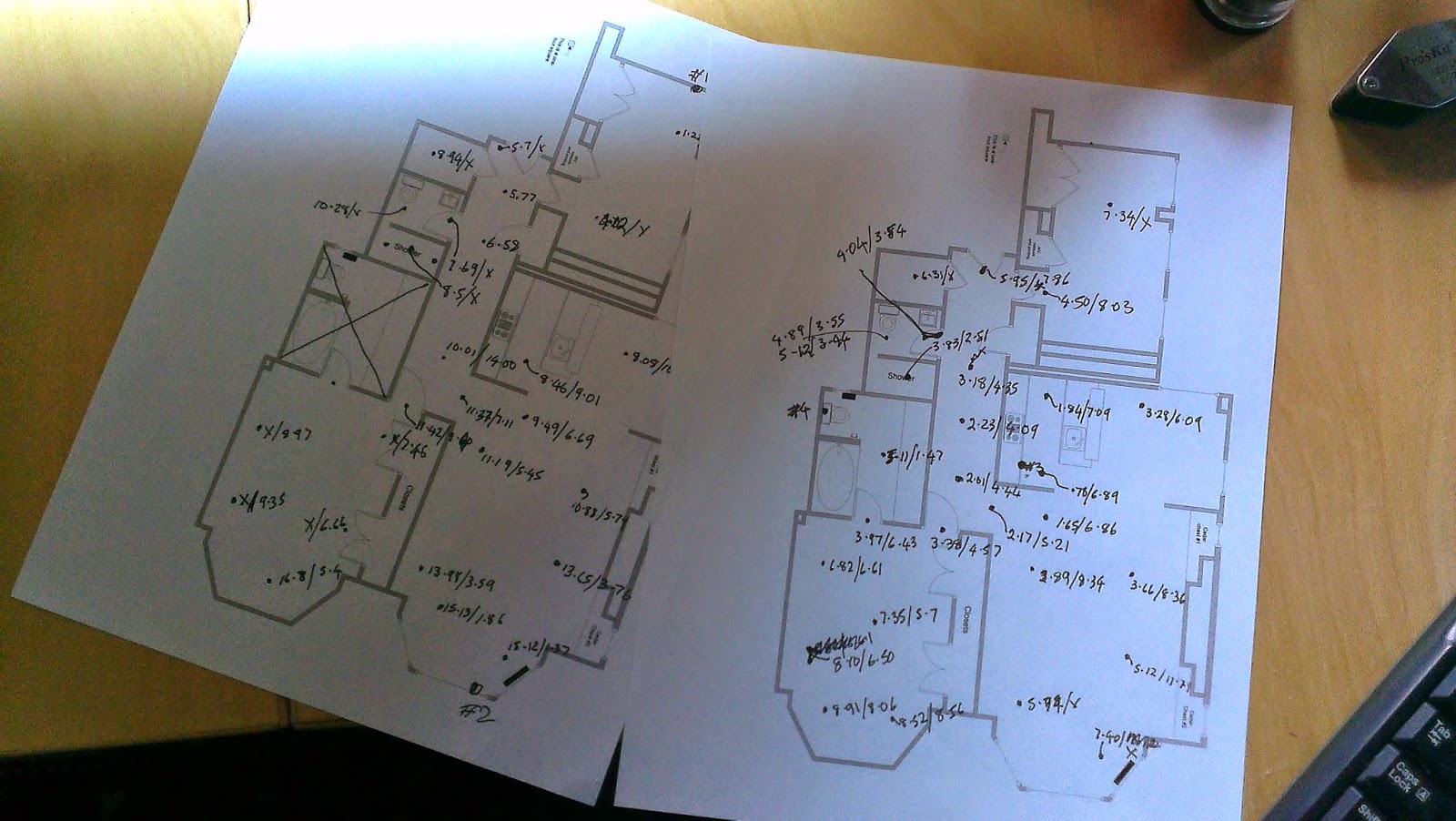 It feels like the coverage is roughly the same as the Nanotron.  I can get from the very back of my office almost to the bedroom area window, a distance on 16m, but it’s a bit spasmodic.  It actually poops out at about 16.53 meters, reporting 16.8 m.  I’d call that respectable.

Unfortunately it was downhill from there.

The bathroom was a black hole with the anchors in the positions I show on this diagram.   Nada!

This diagram is a bit small, but out of 8 ranges on the above test, two had errors in excess of 50″.

I placed the anchors in two other locations, and tried again, but the results were pretty poor.

It was getting tedious, and all the mapping from inches to meters was getting me pissed off.  This is not a good start, so I gave up.

Tomorrow I’ll see if it is repeatable?

My initial thought is that it’s about what one would expect. The antennae are small. The Nanotron had a pretty strong output. Remember that were at opposite ends of the street in Los Altos and it was still working well. But inside/outside the house it wouldn’t get past the big rose bush in front. 2.4 GHz propagation ought to be better than 5 GHz.

It will continue to be a tough challenge. That’s probably why nobody else has come out with a system yet.

The comments about the software are more disappointing. I can’t really understand what the weaknesses are since I haven’t looked at it and wouldn’t recognize them even if I did, but I suppose it highlights the difficulty of doing a lot with less resources. At least it works on some level.

I never received a response to my email asking about CES from Blinksight. It’s interesting the Guus Frericks, the CMO, doesn’t even mention Blinksight on his CV. However, there are hits for Blinksight on Linkedin so maybe they aren’t completely dead yet. On the other hand when people get laid off they don’t immediately change their LinkedIn profiles.

Mik Rabbits on…
I was disappointed too, but it was end of the day.  I am reminded of the f***** homily “every hurdle is an opportunity”, a phrase the gung-ho, ISO-9000, “Quality” acolytes used to roll out.  My old friend David Pendlebury, someone I hope I can introduce you to one day, used to utter the single word “Quality” in the same kind of situations that a lesser soul might say “Bummer”.
Anyway, back to the plot… I guess “every hurdle is and opportunity” is kinda correct because if you manage to get over it, then everyone else might have to struggle over it too., and being first to recognize, and define it is an advantage.   But in our game it is easy to miss the path around the side of the hurdle.
My old Xeroid colleague Butler Lampson, a man with a very waggely tail, and the ability to think and speak at (for me, intimidating) speed,  and not given to much Cynicism coined the phrase: “insurmountable opportunity”.  Let’s hope this hurdle is worthy, and surmountable.